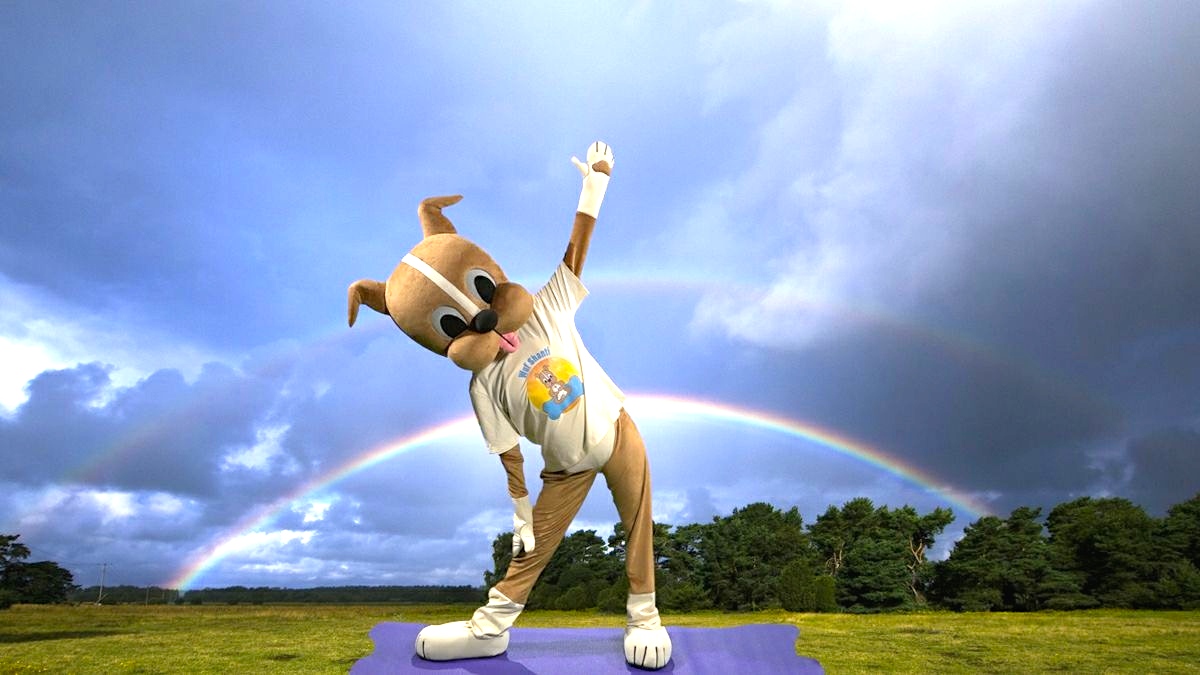 Wuf Shanti was recently featured in the Sun Sentinel, and we are so honored. To read the article on the Sun Sentinel site, click here: http://www.sun-sentinel.com/features/fl-fea-wuf-shanti-fort-lauderdale-boy-20170922-story.html

When 13-year-old Adam Avin needs to center himself, he thinks of his late great-grandpa’s three key mantras: “Think well to be well,” “Smile and the world will smile with you” and “Smile and say thank you.”

This advice inspired Avin to create Wuf Shanti, a human-size dog character that teaches kids about yoga and meditation.

What started out as a couple of sketches and a self-published book about a canine yogi has evolved into a series of videos that appear on YouTube and on the Children’s Television Network in children’s hospitals such as Nicklaus Children’s Hospital in Miami.

This summer, PBS stations WPBT-Ch. 2 in Fort Lauderdale and Miami and WXEL-Ch. 42 in West Palm Beach also began airing Wuf Shanti spots. A free mobile app with the character is in the works.

The Fort Lauderdale teen who started the Wuf Shanti character at the age of 11 used to dress up as the furry mascot to visit children in hospitals and for community events, but he’s literally outgrown the outfit.

“I am getting a little too tall,” said Avin, an eighth grader, during a break from his algebra homework on a recent Thursday afternoon. “I think the costume goes up to 5 feet 10, and I am 5 feet 9, so it’s getting a little tight.”

Now, his mother, Marni Becker-Avin, or a fellow yoga teacher will don the costume for the videos or visits to children’s hospitals.

Avin said he created Wuf Shanti as a way to honor his great-grandfather Jack and to introduce kids to yoga. Avin began practicing yoga at 11 after watching his mother take classes.

“My grandpa didn’t do yoga, but he thought like a yogi,” Avin said. “So we wanted to incorporate both.”

“Yoga is very calming, and I think it’s important to teach kids the tools to deal with stress and emotions and I feel like yoga is the way that helps them with that,” added Avin, who enjoys doing the tree pose and the peaceful warrior pose. He and his mother are both certified to teach yoga for kids.

The Wuf Shanti character was modeled after the family’s brown boxer, Abby.

In all, Avin and his mom have produced 80 videos. Last year, Wuf Shanti caught the attention of Maroon 5 singer and fellow yoga follower Adam Levine, who gave the character a shout-out on social media.

“What a cool way to teach yoga to kids,” Levine wrote on his Facebook page.

In August, one-minute Wuf Shanti spots began airing weekday mornings and afternoons on South Florida PBS stations. On WXEL, Wuf Shanti can generally be seen between 6:28 and 6:58 a.m. and 2:28 and 2:58 p.m weekdays. On WPBT, the schedule changes from week to week.

“We hope these spots will encourage kids to move around and be active, while also offering important lessons about mindfulness and positive thinking,” said Joyce Belloise, vice president of content and community partnerships for South Florida PBS. “We were impressed with the passion and vision that Marni Becker-Avin, and her son Adam, have for making a positive impact through their Wuf Shanti character.”

Like other South Florida kids, Avin juggles his schoolwork with time to hang out with friends. He said he loves to golf, play basketball and dote on his 4-year-old sister. “I adore her,” he said.

What would his late great-grandpa think of Wuf Shanti?

“I am beyond proud of Adam for creating this character and making a positive difference in the world, and I know his great-grandpa would be super proud of him, too,” his mother said.

“I think he would feel very amazed and happy and proud,” said Avin, “because positive thinking has helped with the healing process, and I think he would be very touched that we are trying to spread his message to all the kids around the world.”